Day 1 of real camp and it sure was a scorcher!  Hot enough to melt a water bottle, as some of the boys discovered.  Temps were in the high 80’s and the humidity was thick.  The Water & Sunscreen Wagon got plenty of action, traveling across fields and courts.

The little guys were up at dawn, ready to take on the day.  Counselors rolled out of bed and gave their best 6 AM effort.  Those who were older took advantage of the 8:30 breakfast hour and slept as long as they could.

“Bunk 1 raises the flag at the Rec Hall, and Bunk 2 at the Pine Grove”, the voice on the PA announced.  It’s a big honor to be the flag raisers, and the boys take it seriously.  We all stand at attention while the cabin in charge does the honors.  Once you learn how to fold the flag properly, it’s something that you never forget.

The morning paper, aka “the schedule”, awaits each group at the breakfast table.   Everything you need to know about the day is listed, including where to go when, and which counselor leads every activity.

For example, Bunks 1-9 were lucky to have a Waterfront morning.  Director Gia and her awesome staff at Trickey Pond did a phenomenal job with swim assessments.  The counselors swam alongside the kids, so that no one felt intimidated.  Once you were done it was time for a motorboat ride at the Ski Dock.

But that was just First Period.

There are 7 periods in each day.  The first two are assigned and the third is a choice.  After lunch there are three assigned periods, followed by dinner and another choice period.  Evening Activity comes next, and we wrap it up around 9 PM.

Tonight's Evening Activity was supposed to be a Campfire, but it was still too warm to sit around the extra heat.  Instead, we had “Sunsets and S’mores” down at the lake.  It felt great to be together as one big family having fun while appreciating the natural beauty of the colored sky.  Skylemar’s known for spectacular sunsets, and tonight’s was especially beautiful.  Favorite part of the evening had to have been the Counselor Belly Flop Contest. Congrats to the good sports who had us all wincing and laughing. 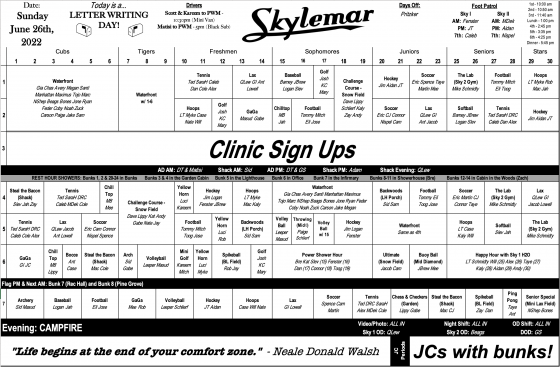 "What was my favorite food? Everything!"

"There is absolutely no doubt that Skylemar was the best choice we could have made for our boys."

"Every single day something reminds me of camp, whether it being seeing a hole-in-one on ESPN and bragging to everyone that one of my campers, Sam Berg, did that at camp, to watching the sunset and imagining the ever lasting picture from my bunk porch of the sun going down behind the mountains and the beauty it entails. This past summer was the most memorable, exciting, happy and most of all fulfilling summer of my life… I can’t even begin to tell you how happy I am that I trusted you both that this was the right thing for me to do last summer; and it far exceeded my expectations. The staff at Skylemar are some of the most amazing people I have ever met and I am honored to be able to say that I have been a counselor at Camp Skylemar."